The Topography of Stephen Curry

Data collection and data analysis are both enormous parts of the modern professional sports industry. During every NBA basketball game, for example, cameras track and record the exact position of every player, plus the ball, 25 times per second. The result is several terabytes worth of X, Y, Z coordinates and an unprecedented level of insight into the nuances of professional basketball. The NBA, in partnership with STATS LLC., calls the system SportVU, and even after two full seasons of league-wide use it remains an absolutely staggering tool. This project is an attempt to visualize a tiny fraction of that data.

Created for a class called “Sculpting Data into Everyday Objects,” The Topography of Stephen Curry is a 3D-printed visualization of every shot attempted by Golden State Warriors point guard Stephen Curry during his 2014/15 MVP season.1 Starting by scraping the raw data from the Internet, then interpolating success rates at each point on the court, I produced a shooting “heat map,” which was further used to algorithmically generate a computer-modeled basketball as though it were being selectively deflated in specific regions, essentially creating a topographical map of a basketball court, with elevation corresponding to shooting frequency and success rates from a given position. The final piece has been 3D-printed using ColorJet Printing technology to produce a life-size basketball in full color and detail.

For context, and for anyone reading this who doesn’t follow basketball, Steph Curry’s 2014/2015 season was almost impossibly great. Curry shot for a .487 field goal percentage including an outrageous .443 from beyond the 3-point arch. He smashed the previous NBA record for threes made in a single season2 by 14, despite only playing in 80 of 82 games and sitting out 17 entire 4th quarters due to overwhelming leads. In short, he was almost preposterously excellent, and he produced a lot of exciting data.

The NBA doesn’t make raw SportVU data publicly available, but manually extracting the bits I wanted was fairly straightforward. I scraped my data from Basketball Reference, but the same process works using the NBA’s own site.3

Above is my initial attempt at visualization. Early on, rather than a complete collection of all 1341 individual shot attempts, I borrowed a model from Peter Beshai’s excellent Buckets app, where data points are also scaled to reflect success rates from that position. In this model, which I created using a Rhino Python script, the height of each data point represents success rate relative to the league average from that position.

The model itself looks sort of nifty, but the discrete data points aren’t much good for 3D printing (or least they didn’t match the image I had in my head), so I decided to try a new approach. In order to produce a model that I could better map onto the surface of a basketball, I took a cue from Kirk Goldsberry and created a heat map from the raw data. Programmed using Processing,4 my heat map gave me continuous values for the entire surface area of the court, and better lends itself to creating the deflated basketball that I was imagining.

With the data formatted to my liking, I moved on to producing the three-dimensional basketball model. Working in Rhino, I produced the flat model that you see below, but didn’t have much success working on spherical objects, so I had to look for an alternative solution in order to effectively deform a ball.

My priority was to create a model instantly recognizable as a basketball, as well as to create an illusion that the deformations on the ball’s surface seemed natural (natural despite showcasing Steph Curry’s stats, which don’t look like the sort of of thing that occurs in nature). I needed a method that would maintain the original curvature of the ball’s surface, meaning that the hottest areas on the heat map, the areas that would appear most fully inflated, would also be no higher than the natural surface of the ball if it were a normal sphere. I achieved my best results with Mudbox, using my heat map as a displacement guide to produce the deformations.

With the data in good shape, I moved on to making my model actually look like a basketball (as opposed to a Rorschach emoji). The exterior of a basketball consists of eight pebbled leather panels, divided by thick black rubber seams, so I began by adding the seams.

Next, I created the pebbled leather texture on the surface of the ball. It’s pretty straightforward to fake that effect using a bump map, but I was designing with 3D printing in mind, and bump mapping is no good in a physical object, so I had to take the more complex route.5 Using Mudbox and working one panel at a time, I sculpted the leathery texture onto the ball by actually displacing the surface.

With the texture in place, I could finally start printing actual objects. Below is a trial print in ABS plastic. It’s three inches in diameter (about 31% of a real basketball’s 9.55 inch diameter), which wound up being too small to get any discernible detail in the surface texture.

The ABS model was printed on a Stratasys Fortus 250mc, which prints using a method called Fused Deposition Modeling (FDM). If you’ve ever seen a MakerBot work then you’re familiar with FDM printing; FDM printers work by extruding a thin molten filament along tightly defined paths to form layers that build up the model. For many people, FDM is basically synonymous with 3D printing, but it’s actually just one of a wide range of fabrication techniques, and in order to print my final model at life scale, I switched to a different printing technology.

As the final step before printing the real thing, I digitally painted the model, again trying to make it look as lifelike as possible.

In powder-bed or ColorJet Printing (CJP), the machine prints by spreading a thin layer of a powderized printing material over the entire surface of the print bed. Once the powder is spread, a print head spreads a liquid binding agent over the cross-sectional area of the layer, hardening the material and fusing it to the layers beneath. Another layer of power is then spread on top, and the process repeats. In addition to generally being faster and cheaper than FDM printing, by mixing traditional printer ink with the binding agent, powder printers are able to print in the full CMYK color spectrum (up to 6 million colors). My final, life-size model was printed using a Z Corp ZPrint 650.6

The end result from a powder print like this is essentially a piece of ceramic,7 but in the interest of making the finished piece feel as much like a real basketball as possible, I applied a thin coating of soft-touch rubber to the surface. Combined with the pebbled leather, it’s actually a pretty good grip, and it has a familiar hand feel.

Here are a few more angles of the finished product. 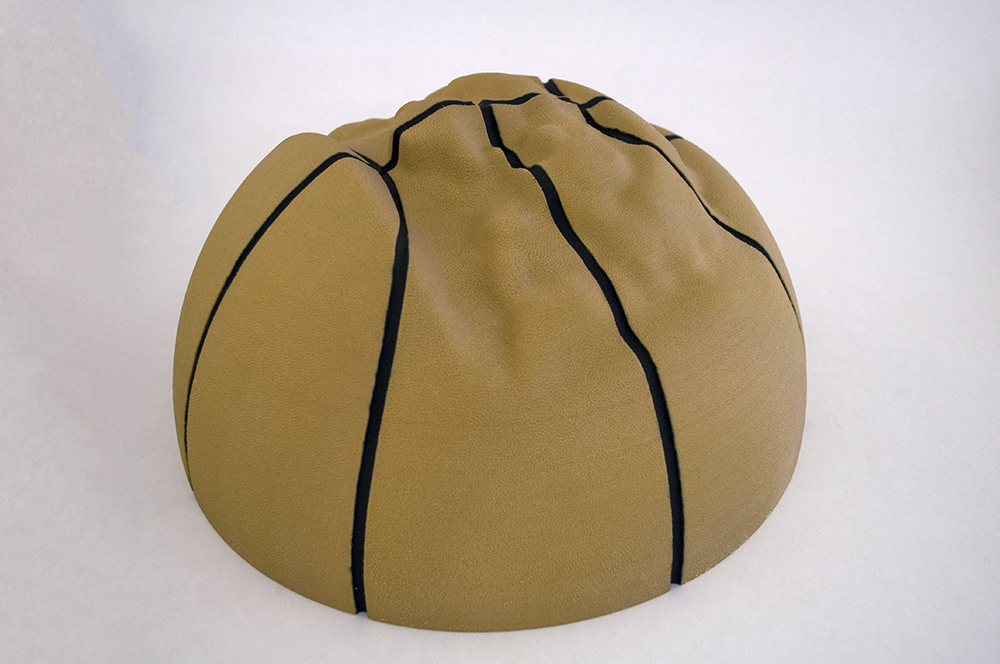 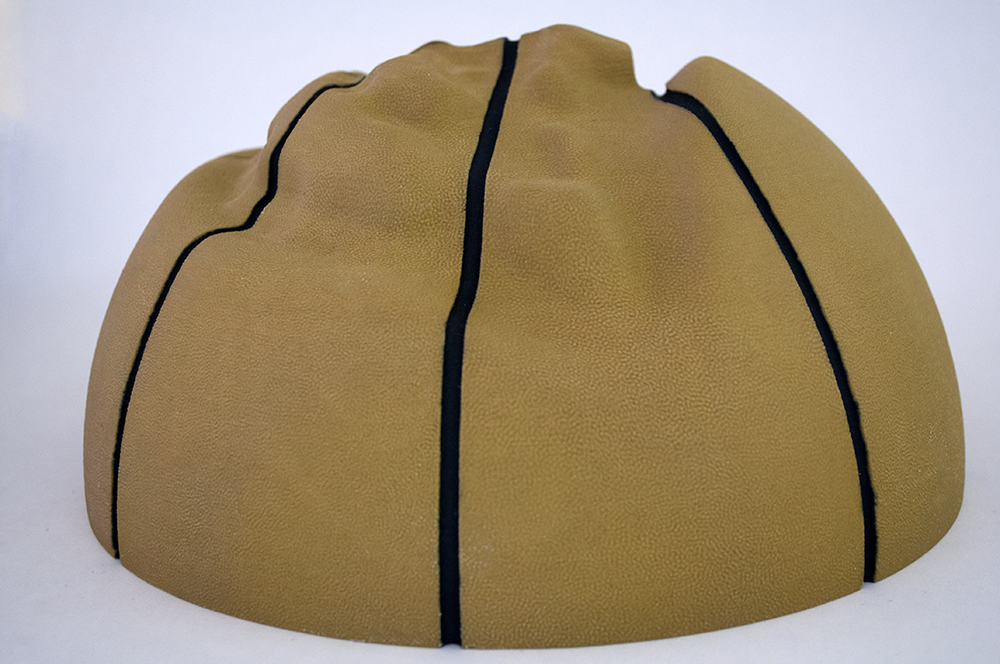 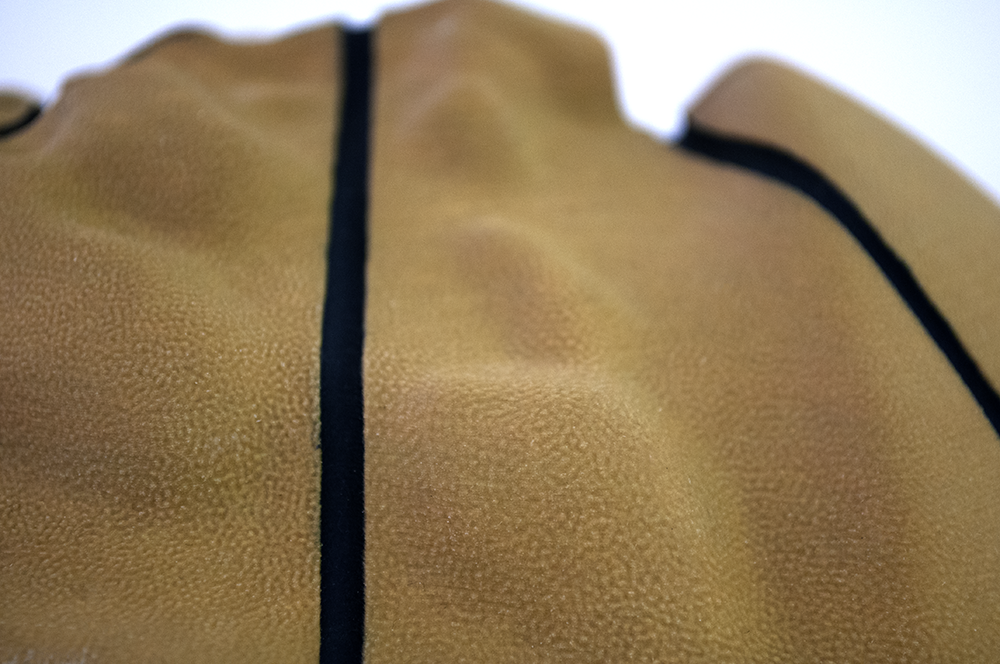 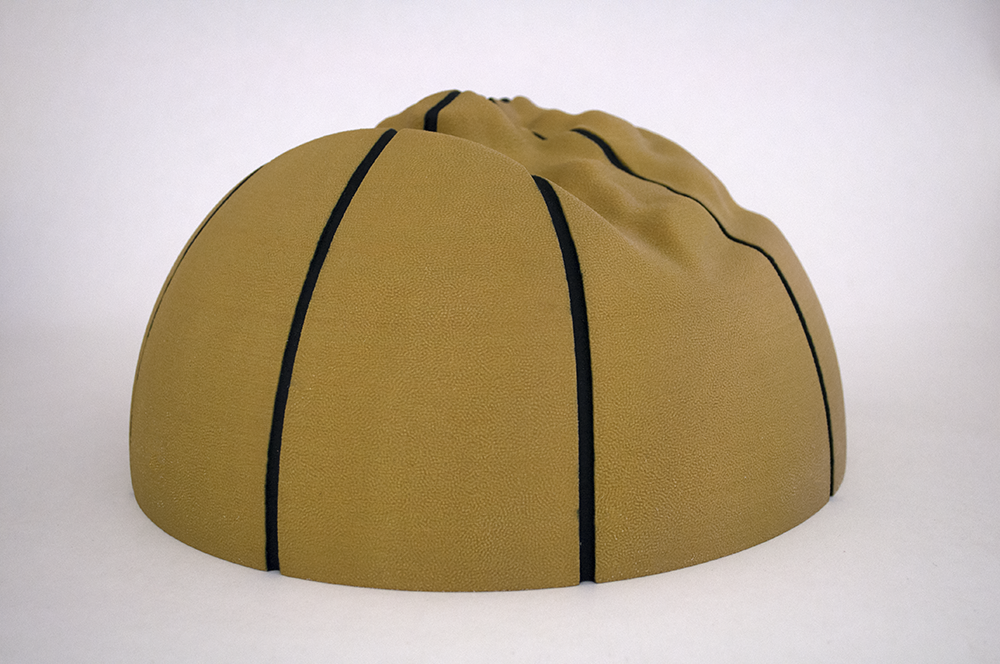 I’m a tactile learner, so throughout this project I was excited by the prospect of being able to hold the data in my hands. As it stands, a model like this isn’t hugely useful in terms of analytics, but to me at least, the tangible element is very compelling.

During the early stages of this project, I didn’t focus exclusively on Steph Curry. I made test models with data from other players, including James Harden, LeBron James, Russell Westbrook, and Anthony Davis. Printing multiple basketballs became too cost prohibitive, so I narrowed my focus to Curry. Every player on that list plays a radically different game, with correspondingly different shot charts, so the maps that I produced varied dramatically. Blown up large and then stamped onto the face of a basketball, the map is a little bit larger than my palm; about the size of, say, an NBA player’s palm instead. There are lots of interesting roads to follow in order to make a genuinely useful analytical tool from all this, but for now the impression of the map creates a unique handprint for the season. In Curry’s case, an historically great one.