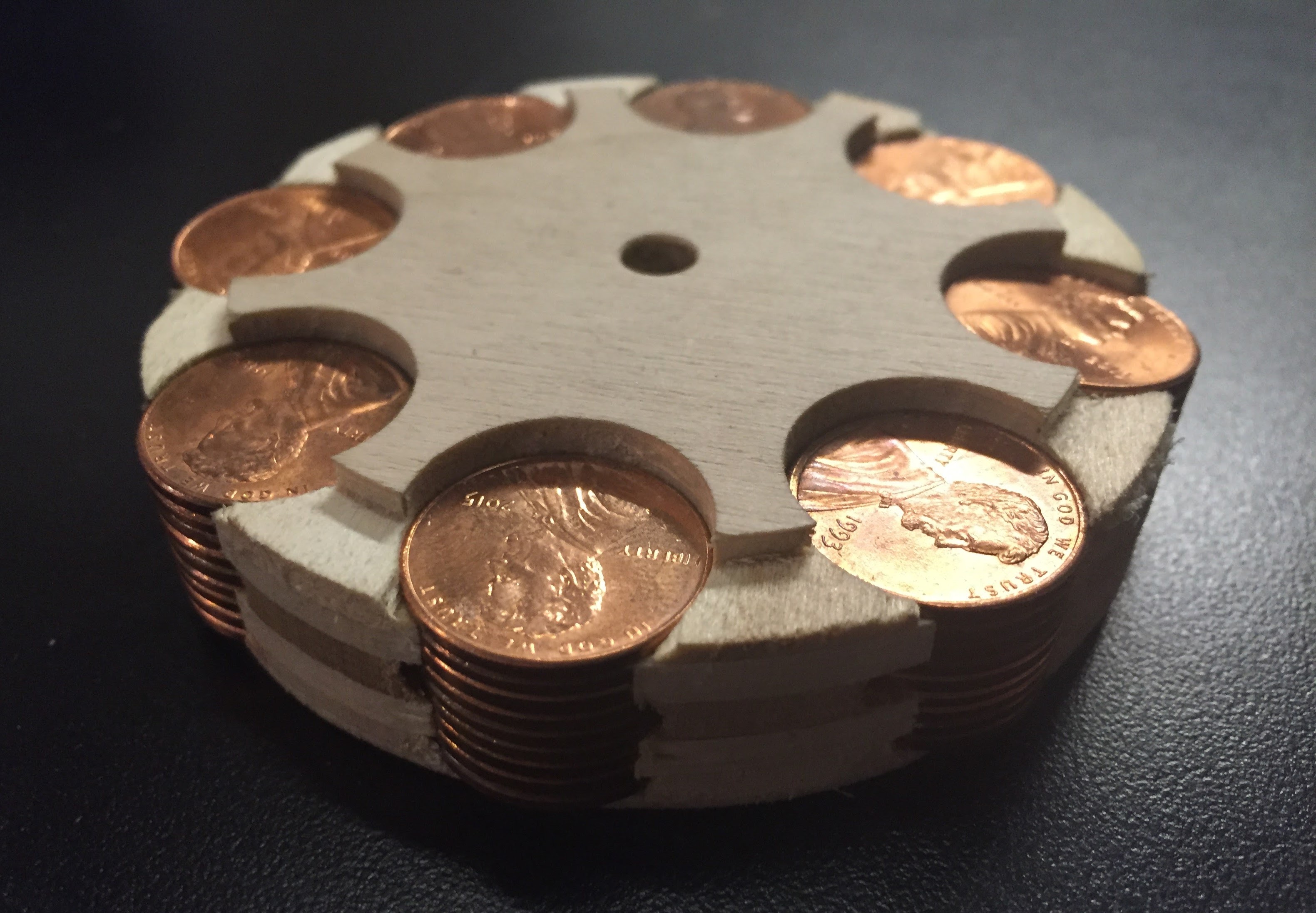 This week for Reinventing the Wheel I attempted to make a flywheel. It didn’t really go great. Initially, I wanted to try machining a brass wheel a la Clickspring, but I kinda chickened out. I can probably turn a reasonable facsimile of his design without using a super glue arbor (no open flames allowed at ITP, so breaking that bond will be tricky), but turning a well-balanced wheel without any sort of dial indicator seemed impossible, so I backed away from that idea. Instead I decided to try following this design to make a walking gyroscope robot.

This is the part where you have a good laugh about how I didn’t think I could turn a good wheel, so instead I tried to 3D print one. Go ahead, chuckle.

There’s a fair amount of hardware involved in the Gyroman robot, so I figured I would probably just focus on the wheel itself, which was a good call, since I didn’t get nearly as far as the rest of the body. The original design uses 3mm axels, which I didn’t have handy, so I wanted to scale up the design to fit the quarter-inch shafts I have in stock. The original files are available on the Instructable page, but as .STL’s there wasn’t much I could do to adjust the center hole, so I decided to redo the model by myself in Fusion, which was pretty straight forward. It also gave me a chance to make a few other minor modifications.

From there I was ready to print. I actually took a quick 3D print job last week, so I was on a bit of a roll, and I decided to brave our MakerBots. Before settling in for the full object, I sliced my model into quarter sections and ran off a test print. It wasn’t gorgeous but it worked well enough, as you can see below:

The test gave me undue confidence in the school printers, and the final results really speak to that. There are any number of problems with the print, but the most notable of course is that it isn’t even round!! I know better than to expect superb results from a MakerBot, but I was stunned at how badly this came out.

3D printing went disastrously wrong, but it did provide some useful notes. In particular, pennies really are a terrible weight to use. Given the age range in your average handful of pennies, you encounter coins that, in addition to having endured decades of abuse, were actually manufactured differently than modern coins, so there really is not consistency to speak of. Of course, I knew that would be an issue going in, but it was still really surprising to see the differences up close; many of the coins were visibly different thicknesses. In retrospect, a better solution that wouldn’t require changing the design would be to have turned down some aluminum stock and parting it into small lengths.

I still wanted to have something finished for class though, so I set up another attempt, this time using the Roland 4-axis mill. Getting the cut going required making the wheel itself a bit shorter (the original piece was about 1.1 inches tall, and my revised design is approximately .6 inches) since I didn’t have any thick enough stock at the time. I ran into my usual frustrations with the stripped down software Roland provides for CAM, but it looks like there’s a light at the end of the tunnel. A few weeks back I found a good tutorial on multi-axis milling in Fusion 360’s CAM mode. Unfortunately, it was only using a beta build of a Tormach post-processor, so I can’t quite get cracking at that, but it’s a move in the right direction. Also, to be extra specific, at the moment Fusion only supports “3+1” axis CAM, where the cutter is retracted, the A axis revolves the stock, and then cutting resumes. The official word though is that Autodesk plans to release support for continuous 4-axis machining later this year, so I’m holding out hope.

Again I got some pretty shoddy results from the Roland, although I can account for most of the problems. The primary issue was just that my stock material kind of sucked. I used a piece of 3/4 inch birch ply, and it looked pretty nice from the outside, but once the cutting began it turned out to have a large number of voids, which was only compounded by the fact that in some areas the cutting left the wood extremely thin, causing even more tear out. The strangest issue though was that my center hole wound up significantly undersized, and I really cannot begin to account for why. Anyway, because of that I couldn’t use the quarter inch axle I had planned on, but the pennies wound up fitting correctly, and they did add a really nice weight and hand-feel to the piece.

I decided to give it one more try, this time using the Othermill. I also decided to use this as an opportunity to get a little ambitious with my CAM and give Fusion’s “adaptive clearing” system a try. Adaptive clear attempts to optimize tool paths by maintaining maximal tool engagement at all times. This also allows for very aggressive plunge depths. Also, it makes the CAM process pretty straightforward since Fusion really just deals with all the calculations for you. It’s quite processor-intensive though, naturally.

I made a few mistakes, but I was really really impressed by the results. In particular, I was stunned at how well my 1/8th inch end mill performed, even while plunging more than a quarter of an inch. It also produced some really spectacular chips, while using the normal settings produces “chips” that are only ever so slightly larger than sawdust particles. Unfortunately, the job still failed, but not because the mill snapped; on my next pass, the mill plunged almost half an inch, which, while ok on a sturdier machine, was just too much for the Othermill. Next time I use adaptive clearing I need to set a maximum plunge depth since the software defaults to the full length of the tool’s cutting edge. Even then, the little mill performed surprisingly well, cutting pretty smoothly despite enormous chatter. Eventually though, the tape holding my stock in place slipped and I had to call it quits, but with a proper fixture it might have been doable. Until next time!